As we prepare for the biggest tournament of the college sports season, I wanted to create a game that focused on the content rather than strategy or results but also captured students attention as the games played out. The Tournament of Technology was my answer!

I have seen this method used before – specifically with books and always kept it in the back of my mind. Games are an awesome way to get students excited about a subject or to review a mass of information but sometimes the strategy or the rules or the results get in the way of the content.

This tournament style game highlights the content and students are forced to focus exclusively on the information for each prompt. There is no strategy since no one can foresee what will win each mini-contest and my favorite part is that this game can be played throughout the year because the results will be different every single time you play.

This was my original idea and I am very proud of how it turned out. My husband and I have played it a few times (true story) and someday I am positive my children will join us.

Tournament of Technology has 30 prompts that spans all of human history. Technology prompts include the wheel, the printing press, and the internet.

The tournament will begin with 16 prompts. Despite my husbands protests I chose to stick to 16 prompts because I fear that you wouldn’t be able to finish in one class period and students may get bored. You do have the option of completing one segment of the tournament a day. For example, on day one, you would only complete the first 16 prompts. Day two would focus on the next eight prompts. Day three would focus on the four remaining prompts. Day four would be the championship round and a winner would be chosen. This would allow you to spend day five discussing and debating with each other over choices that were controversial or maybe have the students write about it.

Tournament of the Arts

After I completed the Tournament of Technology I felt that a huge portion of history was being left out and wanted to add the arts.

I chose to split European art from Asian art realizing that this was going to be a difficult game for students since they are far less likely to know the images or books that are included in the game.

I also did not want students to automatically choose the European art over the Asian simply because they know it better. I removed that automatic bias and created its own game.

The Tournament of the Arts is Eurocentric and includes paintings and sculptures, books and important writings such as Darwin’s theory of evolution. Music and feminist thought is also included for a total of 48 prompts.

A student research page was added so students can look up the art they are unfamiliar with and encourage them to think about why it was important. For example, today we forget how controversial Darwin’s theory actually was and the fact that he published it in a book that was widely read is incredible. It challenged religious beliefs and forced people to consider the importance of the scientific method.

Each subject (paintings, sculptures, books, music, etc) comes in eights so that you could hold a mini tournament. Want students to focus on feminist thought for Women’s History Month? Randomly place four prompts on one side of the board and the remaining four on the other side and let students discuss.

Tournament of the Arts: Asian Edition 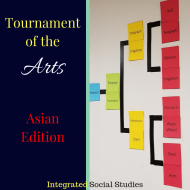 This will no doubt be the most difficult for students as the art featured in the game is much less known in this country. But the art is beautiful and important and teaches us so much about the Asian histories. A student research page is also included in this resource so students can find information about each prompt so they can discuss/debate properly.

In the end, they will be more versed in Asian art and feel less uncertain when they are faced with Asian images in the future.

The Tournament of the Arts: Asian Edition includes 36 prompts that include art from:

To help familiarize students with Asian images I included architecture in this tournament.

Maybe by now you are convinced of the fun and learning that is possible with the tournaments and you want them all. Get the Tournament of Technology: Full Bundle. All three tournaments are bundled together, saving you money! 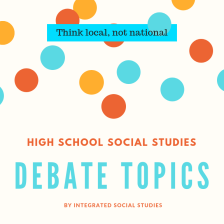 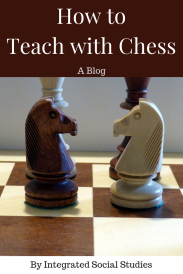